The Board of Trustees of the Sugar Grove Public Library District voted during the regular board meeting on Wednesday, December 14, to place an operating rate increase question on the April 4, 2023, consolidated election for voters in the District. The building bonds that were issued in 2004 and used to construct the current Library at 125 S. Municipal Drive will be paid off in February 2024. The increase will be equivalent to the amount of debt reduction, resulting in a no-net tax increase that will shift funds used for the bond into operating funds.

What does this question mean? 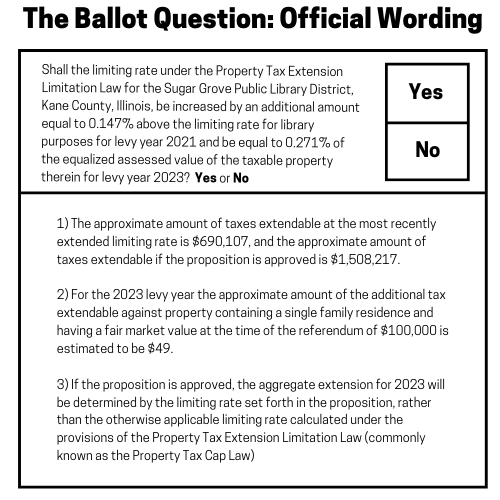 How is it possible to have a zero net tax rate increase? 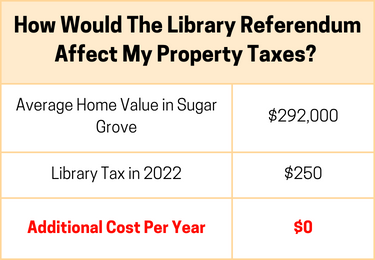 How would this referendum impact my tax bill?

What is your Library worth?

How much money are you saving by using the library?

Use this handy Library Value Calculator to find out.

The Board of Trustees is asking residents to vote during the upcoming April 4, 2023 consolidated election, because it is the most fiscally responsible time to do so, as the building bonds will be paid off. The referendum question will ask for an increase in the operating fund limiting rate. The rate of the building bond will be reduced by the same amount. This will result in no-net increase to your tax rate.

As stewards of the Library District, the board is responsible for maintaining the taxpayer's $8 million dollar facility. It finds that the inadequate amount of revenue currently received to operate will put the Library into a precarious situation as it does not have the funding to pay for upcoming building needs.

Since the new Library facility opened in 2009, the Library has not had the funding to operate the library full time and had to recently (9/1/22) reduce hours 8% by closing on Sundays. Libraries in the area are typically open for 65 hours a week, and the Sugar Grove Public Library is already only open 46 hours a week, or 30% less than the standard. Should the referendum fail, Library hours would decrease further to 34 hours a week, a 27% reduction in hours, along with a 22% reduction in programs, books, and services.

The Sugar Grove Public Library District tax rate was established in 1963, making it 60 years without an increase to the operating rate.

How we made it here:

During the 2004 election, there were two questions on the ballot for the Sugar Grove Public Library. The question to build the new library passed, but the question to fund the new library failed. The Board of Trustees continued to place the question of operating fund increase to voters at the ballot eleven (11) times between 2004-2014 to get voter approval for an operating tax rate increase. Please click here to view a list of past referendum ballot questions and results.

There have been no further questions on the ballot for the Library in 9 years.

The Library used various methods to keep costs down while offering the most services possible to residents. These included: reduction in hours, utilizing volunteers, applying for grants, and employing an all part time staff with no health insurance or IMRF. Additionally, there has been virtually no way to save for capital needs or afford maintenance on the aging facility.

A capital needs plan estimates the Library will need approximately $600,000 in the next 5-10 years towards maintenance and capital needs for the 26,000 square foot building and 5 acres of land, and over $2 million in the next 20 years. Therefore, the Library can not continue to operate with this level of funding without going into debt or becoming inoperable.

What will happen to the Library services if the referendum passes with a “Yes” vote?

The Library would receive approximately $818,000 annually in operating funds in addition to its current revenue of 690,000, for an operating revenue of $1,508,00. This increase is roughly the amount of the building bond payment, but it would be moved to operating the library instead of debt service. Our last payment is due February 2024. If the Referendum passes, the Library would start receiving this additional revenue in June 2024, which is when services would increase or resume.

So how would the additional money be used?

Roughly, the additional funds would be spent as follows:

What will happen to library services if the referendum fails with a "No" vote?

If the vote is no, the Library would remain at its 60 year old tax rate which currently produces an operating income of about $690,000. The Library would need to at minimum begin saving $150,000 a year in order to avoid having to close due to facilities costs that would deplete reserves. This $150,000 a year loss would represent about 22% of the District's operating revenue.

It would require the library to:

Note: As stewards of a publicly funded building, The District must maintain the facility and grounds and avoid going into debt or having to close the Library doors due to unusable spaces and unaffordable repairs. The District must also meet the needs of the community. Currently, the Library District cannot keep up with the demand for increased programs, hours, and services.

How Large of a population does the Sugar Grove Public Library District serve?

Per the 2020 census, there are 16,114 residents of the Sugar Grove Public Library District, from Sugar Grove, Aurora, Montgomery, Elburn, North Aurora, and Batavia, covering a 37 mile area.

The Village of Sugar Grove 2021 Census Population was 9,235. Therefore the Library serves 6,836 more residents than the Village.

Search the Illinois Library District map tool and look up your address.

No. The Sugar Grove Public Library District is an entirely separate taxing body from the Village. Our taxing rate and revenues are independent of any other institution.

See the chart below for the list of taxing bodies you might see on your tax bill if you live in Sugar Grove.

The Sugar Grove Public Library District is governed by a Board of seven Library Trustees who are elected by district residents. Each Trustee serves for four years and the Board is responsible for setting Library Policy and hiring the Library Director. Trustees serve without compensation.

Though the Library receives no funding from the Village of Sugar Grove, it does have a partnership with the Village and other taxing bodies through the Sugar Grove Arts and Entertainment Committee for the Groovin’ in the Grove series. 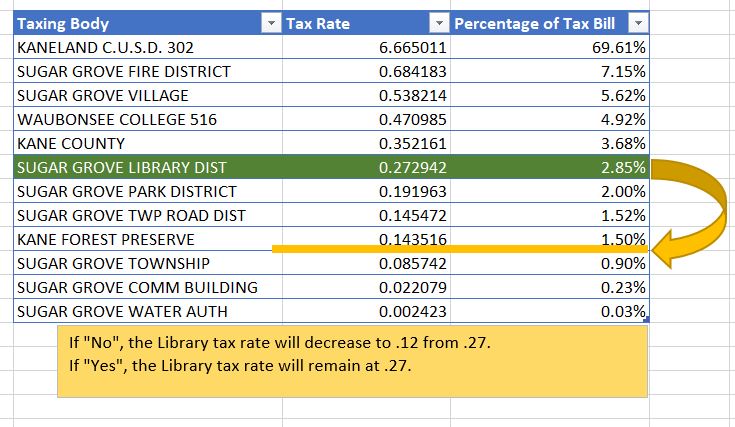 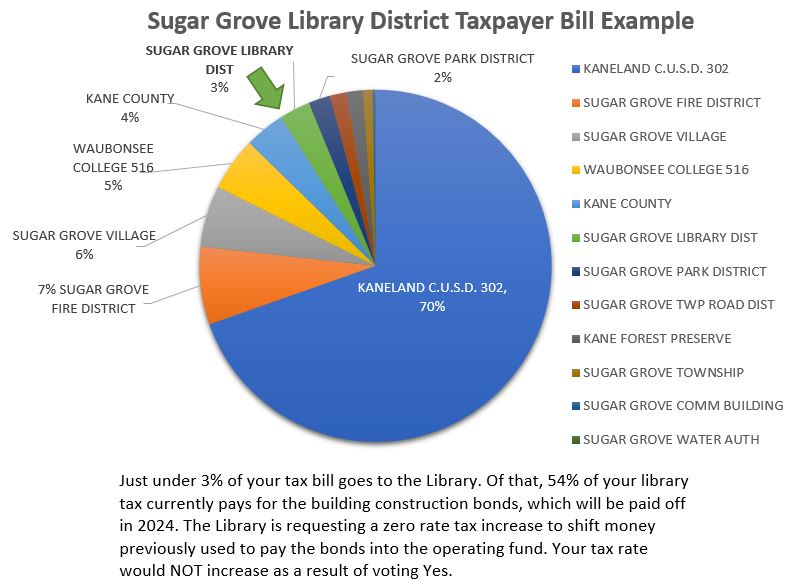 Didn’t the library have a tax rate increase when the new building was constructed in 2009?

Although the construction bonds were approved by voters, an increased operating tax rate to run a larger building was never passed. Therefore, the Library operates on a tax rate that was established in 1963 and was intended to fund the a much smaller previous facility that was 25% of the size of our current library.

The Library has not had a voter approved operational tax increase since the Sugar Grove Public Library District was founded 1963.

How is the Sugar Grove Public Library District Funded?

95.7% of library funds come from property taxes. The remaining 4.3% is received from impact fees, overdue fines, donations and grants.

What will the ballot question say?

Shall the limiting rate under the Property Tax Extension Limitation Law for the Sugar Grove Public Library District, Kane County, Illinois, be increased by an additional amount equal to 0.147% above the limiting rate for library purposes for levy year 2021 and be equal to 0.271% of the equalized assessed value of the taxable property therein for levy year 2023?     Yes   or   No

Note: This question does not reflect any information about the zero/no-net tax increase, because this is the required wording per Illinois State Statute.

Aren't staff in the Library all volunteers?

The library is very grateful for the many volunteers that assist us! That being said, all library staff members are paid for their work. At least 30% of our staff have advanced degrees in the library field, holding a Master’s degree in Library and Information Sciences.

All staff members including the Library Director work 30 hours a week or less, and do not receive health insurance or a pension. The Library is not a part of IMRF (Illinois Municipal Retirement Fund). Staff receive a small HSA stipend and life insurance.

What has the Library Done to Keep Costs Down Over the Last 13 years ?

Should voters vote "No", the Library will have to reduce hours, staffing, books, and programs by at least 22% in order to care for the facility and keep it from becoming inoperable.

Sourcing information from the Illinois Public Library Annual Report from the Illinois State Library, you can see how we compare to our neighboring libraries. Our library tax rate is lower than most area libraries that have comparable building size and population served.

The $100,000 fair market value is taken directly out of the referendum questions on the ballot. The District has no choice in how the questions is worded as the wording comes from the County Clerk and is regulated by Illinois State Statute.

However, the average home value in Sugar Grove is $292,000, and the current Library tax for a home with that value is equivalent to $250. If the referendum passes, the tax rate would remain the same. If the referendum fails, the tax rate would reduce the tax bill for the library down to $135 annually, or a reduction of around $11.25 per month (for home valued at $292,000).

Why aren’t you asking for bonds instead of an operating tax rate increase?

An operating tax increase is a set rate change, whereas bonds require taxpayers to pay interest during time of repayment, similar to a home mortgage. Our facility needs long-term maintenance and a rate increase helps to prepare for that. While ensuring building maintenance issues are attended to, the library will be able to maintain materials and program budgeting levels. By avoiding bonds, the library will also save taxpayers money since no interest will be involved from borrowing monies.

Why aren't you asking for less money than the amount of the building bond?

The Library evaluated costs for increasing service hours, programs, maintaining the facility, and creating a capital reserves fund. The amount we found to need was slightly higher than the amount of the building bond, but the Library Board of Trustees wanted to be the most fiscally responsible. The amount we are asking for is adequate and not excessive. We will be able to provide stability to library operations for decades to come with this operating rate increase.

Can I See More Information About the Library's Finances? 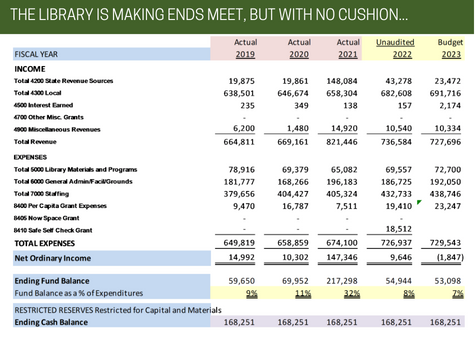 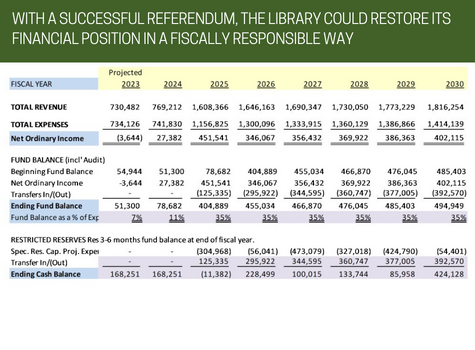 Who do I call if I want more information?

How Else Can I Learn More About this?