This page highlights the Library's monthly programs for adults. Browse our calendar to view all adult programs, which are color-coded in dark blue. 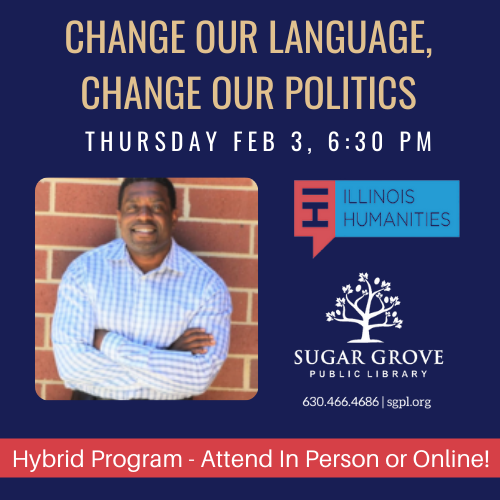 The current American political climate is notoriously full of acrimony and vitriol. Research suggests that the partisan division in the US electorate is widening as Americans increasingly segregate by class, geography, and ideology.

From issues of race to the role of government, language plays a significant role in fueling political division. For the sake of simplicity and expediency, we often reduce controversial conversations to sound bites, hashtags, and the language of marketing campaigns. Terms like conservative and liberal, black and white, pro-choice and pro-life, gun control, and illegal immigrant all are loaded with a set of definitions and often erroneous assumptions that drive intense emotion. For example, the word “black”, by definition, means evil, and wicked. The word “white”, by definition, means pure and innocent. When these terms are ascribed to human beings, why would they not evoke feelings about character, superiority, or the perceived threat or guilt of groups of people? Here are a few questions to be considered…

This presentation is designed to change the way we discuss politics. As former candidate for public office and someone who has spent a career having difficult conversations around the topics of religion and politics, Ted has had a plethora of experiences navigating these dangerous waters.

Illinois Humanities is supported in part by the National Endowment for the Humanities (NEH) and the Illinois General Assembly [through the Illinois Arts Council Agency (IACA)], as well as by contributions from individuals, foundations and corporations.

Any views, findings, conclusions, or recommendations expressed by speakers, program participants, or audiences do not necessarily reflect those of the NEH, Illinois Humanities, IACA, our partnering organizations, or our funders.

Join us in the meeting room for a popular movie. Drinks and single-serve bags of popcorn will be served. Registration is preferred but not required.

Check back to find out which movies will be shown!

Instructions for craft kits are listed here in case you were unable to register for the Craft program. Click on the links to open PDF files.

There are some amazing virtual events related to genealogy, science, health, and gardening going on online right now. Though we are not hosting it, we wanted to be sure you have information about the events so we have placed the information on our events calender for you to browse. Click here to see the calendar.

back to adult home