The Sugar Grove Public Library began in 1962 with a donation of slightly under 500 books, and became a public tax supported institution in 1963.  The first fully operational Library opened in 1980 in a 6,600 square foot facility. Due to a growing population and the need for space, updated facilities, emerging technology and desires for programming and civic space, voters voted YES for a new facility which opened in the current location at 125 South Municipal Drive in 2009.

The Library was previously housed in the current Township building and briefly in the Community House. 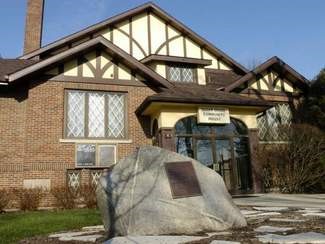 The current 5+ acres of land for the Library was purchased for well below market value after free land offers were rescinded by Neuman Homes as the developer terminated the projected Promenade project. A generous local benefactor offered free land, however this land was unimproved (water, sewer, electric) and in a location that would have been challenging. It was determined that it would actually cost more to take free land than purchased developed land at a discounted price and in a location that would situate the Library by developing neighborhoods and other municipal services.

As local neighborhoods continue to grow, the destination has proved a success as the local elementary school is in close proximity and families are easily able to walk and bike to the Library. The continued growth of Sugar Grove provides an influx of new residents eager to bring their families to the Library.